3 weeks ago whilst playing around on Facebook I stumbled upon a group called Adventure Queens. I thought ‘wow, a place for other women like me’ so I joined. I quickly learnt that there was a campout coming up. I got so excited by the prospect of meeting some of these women in person I booked my ticket without knowing how the hell I was going to get there. Lucky for me some of the Adventure Queens were talking about where they were travelling from on the group page and Mia very kindly offered me a lift as she was travelling from Sheffield.

The weekend quickly came around. I was nervous because although in my day to day life I’m probably the most adventurous out of my friends I feared that these women would make what I’ve done look like a package holiday to Spain in comparison. I always get scared when I meet new females anyway because there’s always a chance that they might be bitchy. At the end of the day though I didn’t really know what to expect so I packed my stuff and off I went.
The journey there with Mia was amazing. There was no awkwardness despite us only meeting that day. We just hit it off right from the word Go. When we arrived everyone was so friendly. We put our tents up and joined a group of ladies sat around chatting excitedly. The campsite was in a stunning spot and there were lots of positive vibes flowing.

When the organisers did the welcome chat they asked everyone who’d come to put their hands up if they didn’t know anyone there prior to the campout. To my utter amazement everyone apart from 3 people put their hands up. This is when I knew I 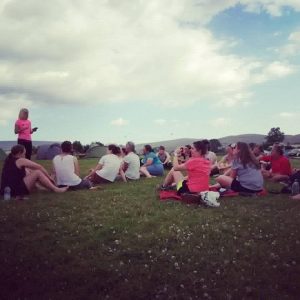 The night kicked off with campfire stories whereby 2 Adventure Queens shared their stories of adventure. Both Adventure Queens spoke of a period of mental health that happened prior to their adventure. I’d always thought I was an anomaly in terms of having mental health issues whilst still being adventurous and in to travelling. I thought that to be adventurous and want to go travelling you had to be confident, secure and stable at all times and that somehow I’d accidently stumbled on a passion and a path that people like me don’t usually venture on. My goodness, how wrong was I!

As the night went on we toasted marshmallows on the fire, shared our experiences and learnt from each other. There was a bond and connection within the whole group that can’t quite be put in to words. 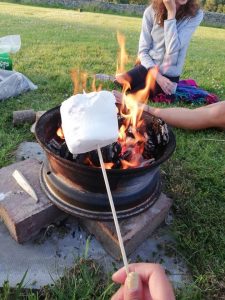 Something that shocked me was the lack of ‘one-upmanship’ that I sort of thought that there might have been amongst a group of very well-travelled people. None of the women were in competition with each other. Instead all the women encouraged, supported and celebrated each other’s successes and dreams. I went to sleep that night cold but amazed and unbelievably happy.

The next morning I woke having had the best nights sleep ever which I don’t quite understand given that my sleeping mat was super thin. I guess it can be expected given that it was a £3 Morrison’s own sleeping mat. There was still good vibes pulsating around the campsite. On my way to the toilet block I got chatting to a girl. We shared our experiences and added each other on Facebook. All that from going for a pee!

One of the Adventure Queens was leading a acro-yoga session that morning. I’d never heard of it but I had an impression t 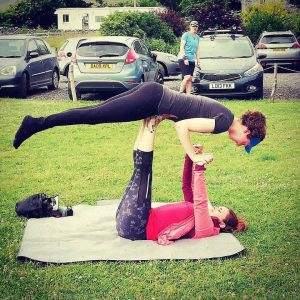 hat yoga was quite a serious, quiet sort of sport. During acro-yoga we laughed a lot whilst falling in to heaps on the floor trying to do the poses, chatted and had so much fun. Once again, preconceptions blown right out the water!

The cherry on top of the epic cake was on the way home when me and Mia had some brilliant feminist rants, got deep about our childhoods and did some more bonding.

All in all, this weekend was deep, mind blowing, inspirational, positive and just bloody brilliant. Love you Adventure Queens!